People have inhabited Arizona for a very long time, more than 12,000 years. The San Pedro River runs northward from Mexico through southeastern Arizona. The upper San Pedro Valley  contains the highest concentration of preserved Clovis sites in North America. Studies of the Murray Springs site uncovered many distinctive stone Clovis spear points. Because  they found these Clovis points associated with the bones and teeth of now extinct mammoths, bison, camels and horses, scientists conclude that these Paleo-indians remained in the San Pedro Valley to pursue these large game animals.  The climate was much different at that time, being much cooler and wetter.  The climate became warmer and drier and by 6000 BC the megafauna had died off. The people had to change their way of life to survive.

The people living in Arizona after the Paleo-indians have been called the Archaic people.  They were hunter-gatherers who moved over the land as the seasons changed.  Because of the variety of stone projectile points found, it’s apparent that different groups ranged over a wide area. They also must have had contact with people living in present day Mexico. Trade items found by archeologists include shell from the Gulf of California, turquoise from southern Arizona, parrots and copper bells.   Eventually they learned to farm and settled into stable communities.  Several general groups of people emerged.  Those that lived in the south have been called the Hohokam.  They constructed irrigation canals along the rivers in the area that is now Phoenix.  The Mogollon people lived in eastern Arizona, the Patayan lived along the Colorado River and western desert areas and the ancestral Puebloan peoples lived on the Colorado Plateau in northern Arizona. Pottery sherds we find today reveal differences in cultural style and the remains of their homes vary widely according to the area they inhabited and the climate there. 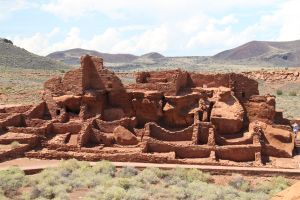 The Sinagua people created Wupatki in northern Arizona after the eruption of Sunset Crater in 1064 AD.  The cinders from the eruption made the ground more arable, and they were able to live in one place in a puebloan culture.  The Tsegi phase sites at Betatakin and Keet Seel were built by the Ancestral Puebloan (Anasazi) people in the natural alcoves in the sandstone canyons of northern Arizona.  These sites are maintained by the National Park Service. The ancient people who inhabited Arizona led the way for the modern native americans you will find there.  More in next post.  Historic Arizona