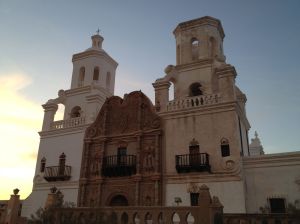 Nearly two centuries after the decline of the large Archaic cities, when the first Europeans arrived, most of the natives were living in simple shelters in fertile river valleys, dependent on hunting, gathering, and small-scale farming for subsistence. (More at link.) Spanish explorer, Cabeza de Vaca, and a dwindling number of would-be settlers roamed the desert of the southwest from 1528-1536. Cabeza de Vaca became one of the first Europeans to encounter the indigenous peoples of North America.  He found those nomadic groups who spoke of the magnificent cities built to the north of Mexico. Upon his return to Spain, his writings stirred interest in further explorations of the land he had travelled because an old Portuguese legend spoke of lost cities of gold. The expeditions of Fray Marcos de Niza, and Coronado followed, all in pursuit of the riches they imagined from the tales told by the indigenous for whom the pueblos of the Zuni seemed marvelously rich.

The Arizona Indians they encountered belonged to three linguistic families: Uto-Aztecan (Hopi, Paiute, Chemehuevi, Pima-Papago), Yuman (Yuma, Mohave, Cocopa, Maricopa, Yavapai, Walapai, Havasupai), and Athapaskan (Navaho-Apache). The Hopi were the oldest group, their roots reaching back to the Ancestral Puebloan (Anasazi); the youngest were the Navaho-Apache, migrants from the Plains, who were not considered separate tribes until the early 18th century.

The first Europeans to live in Arizona were Franciscans, who in 1629 established a mission to the Hopi at the village of Awatovi in northeastern Arizona.  This did not end well for the Franciscans and it wasn’t until 1692 that San Xavier Mission was founded by Father Eusebio Kino in southern Arizona. The Spanish quest for riches continued and in 1736  silver was reportedly found near a Pima Indian village southwest of present-day Nogales.  This brought more settlers and Spanish prospectors north out of Mexico.  The Pima people were uneasy with the Spanish incursion and as a result, Spain created a military outpost at Tubac. The garrison was moved to the new fort at Tucson in 1776.

As missions, ranching and mining prospered, Spanish troops campaigned against the Apache in southern Arizona and eventually worked out a peace.  The attention of the Spaniards turned to the Revolution and in 1821 Mexico gained independence.  Most of modern-day Arizona was part of Mexico at that time.  The 1835 Texas war against Mexico weakened its hold over the land in the southwest.  The US Army of the West fought the Mexican War and the US took control over New Mexico (including Arizona) and California.  With the 1848 Treaty of Guadalupe Hidalgo, the war ended and the US gained title to Texas, California and New Mexico.