One of the many wonders to anticipate in northern Arizona is the day in late summer when the Verbesina enceliodes, Golden Crownbeard, bursts out in this brilliant vista. 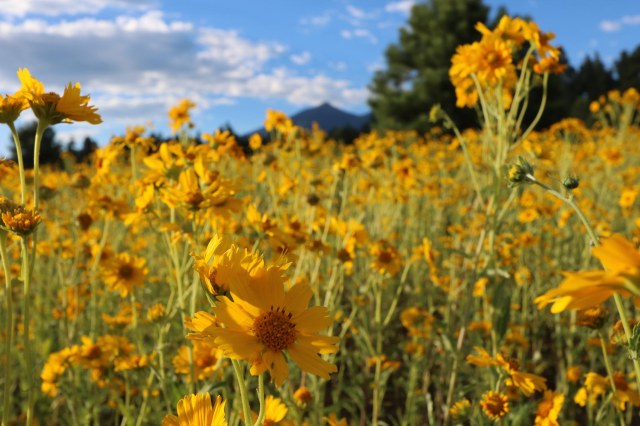 These brown stalks appear in the Ponderosa Pine forest every year. Despite their brown color they are plants.

No part of the plant has chlorophyll and they are parasitic on mycorrhizal fungi in the soil. Most plants in a natural setting form a mutual symbiotic relationship with mycorrhizal fungi. The fungi filaments greatly increase the nutrient uptake of plants and in turn receive food. The parasitic Woodland Pinedrops do not create a mutual relationship and only take from the fungi.

The flowers of  Woodland Pinedrops 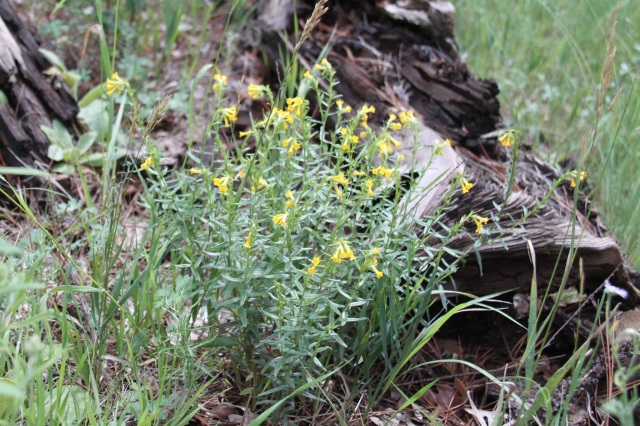 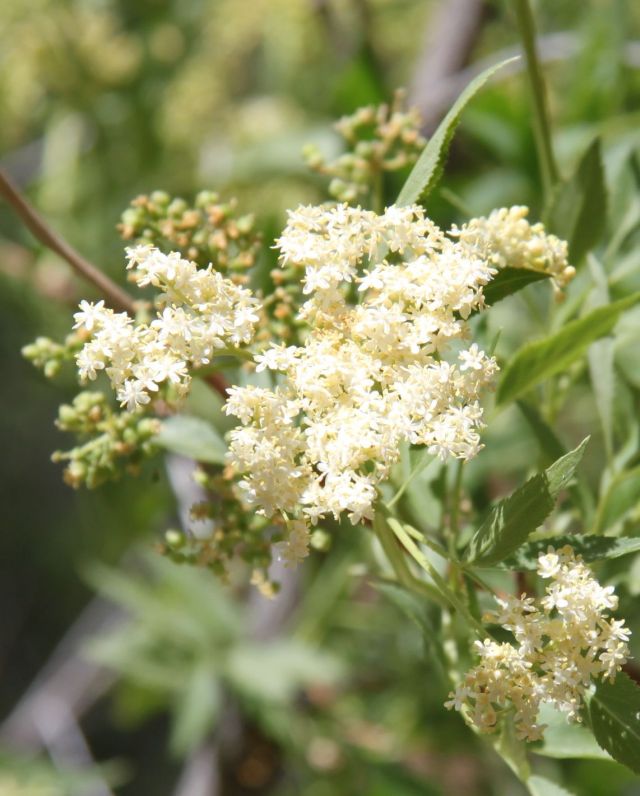 The blue elderberries of northern Arizona are ripening! There are various names for this plant, including elder, Arizona elderberry, American elder, sweet elder, blueberry elder and more. It also has various taxonomic names and changes have recently occurred.  Southwest Biodiversity (swbiodiversity.org) lists it as Sambucus cerulea. All parts of the Elderberry plant are valuable as healing plants in many folk remedies. Flowers are even used medicinally and can be prepared as a tea. 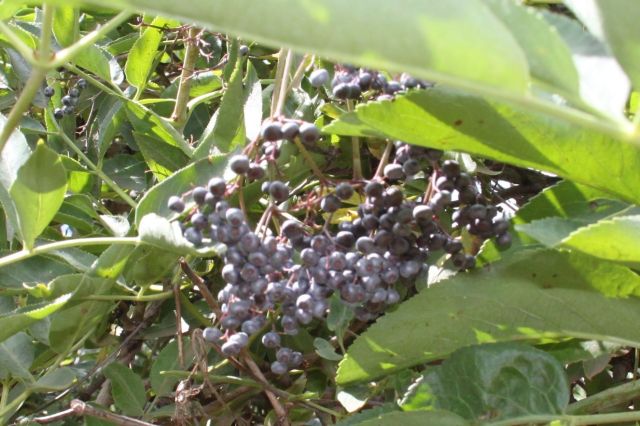 Only blue or purple elderberries are edible. Red elderberry fruits of other species are toxic.

The Kachina Trail runs along the southern side of the San Francisco Peaks, shown here, at the 9800 foot line. The highest Peak is Humphreys Peak at 12, 643 feet. This is the highest point in Arizona. This photo was taken from Schultz Pass Road at about 7000 feet elevation. Flatlanders planning on hiking the area should allow time for acclimation.

The Kachina trail is named for the Kachina Peaks Wilderness through which it runs. The San Francisco Peaks, or Kachina Peaks are sacred to many tribes including the Havasupai, Hopi, Navajo and Zuni. The trail head shown here is located just below the Snowbowl ski area outside of Flagstaff, Arizona.

For much of the 6.8 miles, the Kachina Trail winds through massive groves of Aspen trees. 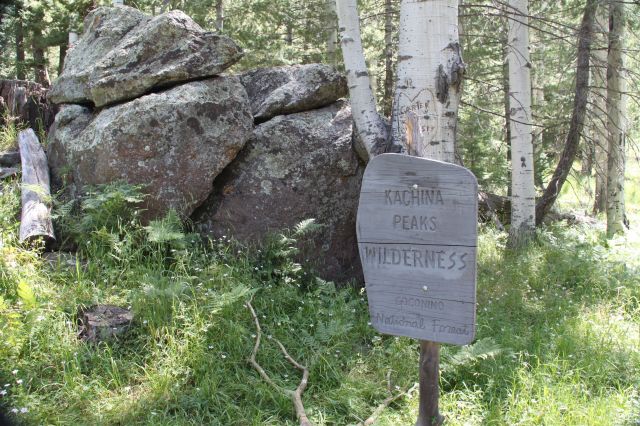 The Kachina Peaks Wilderness area covers over 18,000 acres. and only foot travel is allowed. The ecosystem is fragile, and hikers are encouraged to stay on the trail. 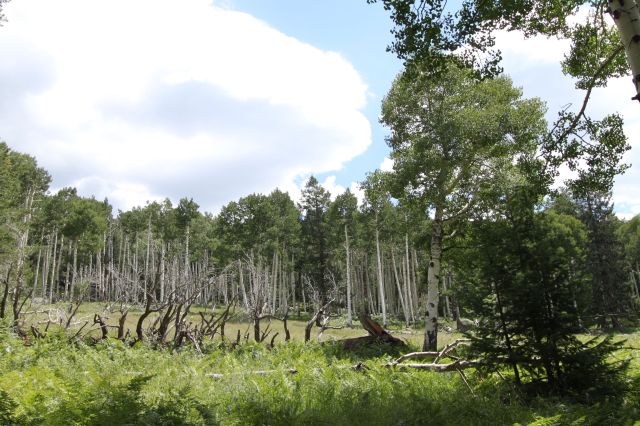 Quaking Aspen trees line the edges of the many grass and fern covered meadows.

Everywhere are reminders of the violent origin of this mountain, a stratovolcano, which last erupted 1.4 million years ago.The original 16,000 foot summit collapsed, maybe in a blast such as Mt. St. Helens, creating the caldera now named the Inner Basin. Ice ages have passed this way previously, and glaciers scarred the slopes. These peaks are the centerpiece for a huge volcanic field which was last active in AD 1100, when indigenous peoples inhabited the area. Here you can see various layers of lava flows now hung with delicate greenery. 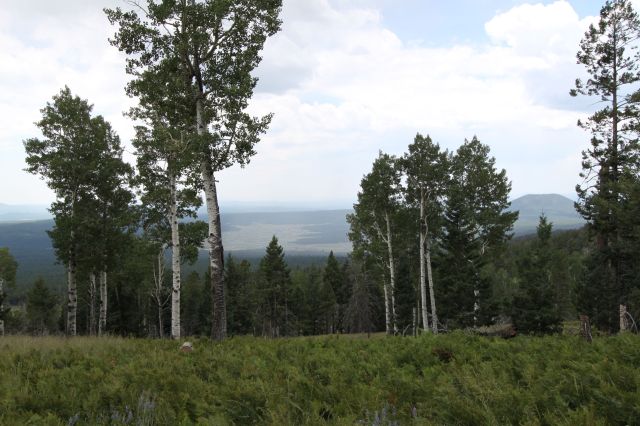 Looking south from the high elevation you can see far into the northern Arizona countryside, spotting some of the 500 cinder cones of the volcanic field. 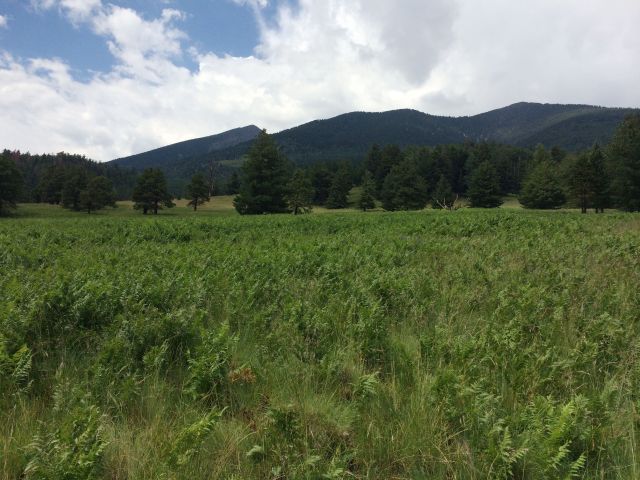 Looking north you can see the tips of several of the San Francisco Peaks, which are above tree line.  Here are Agassiz, Fremont, and Doyle Peaks. The tallest, Humphreys, lies hidden behind the others. If you imagine drawing a line to connect the sides of these slopes up in the air, you can get a picture of how large this volcano once was.

Summer weather around the San Francisco Peaks can change rapidly. What starts out as a sunny day with a low chance of precipitation can change quickly. Do remember to bring plenty of drinking water on your hike. Elevation sickness can be eased by staying hydrated. 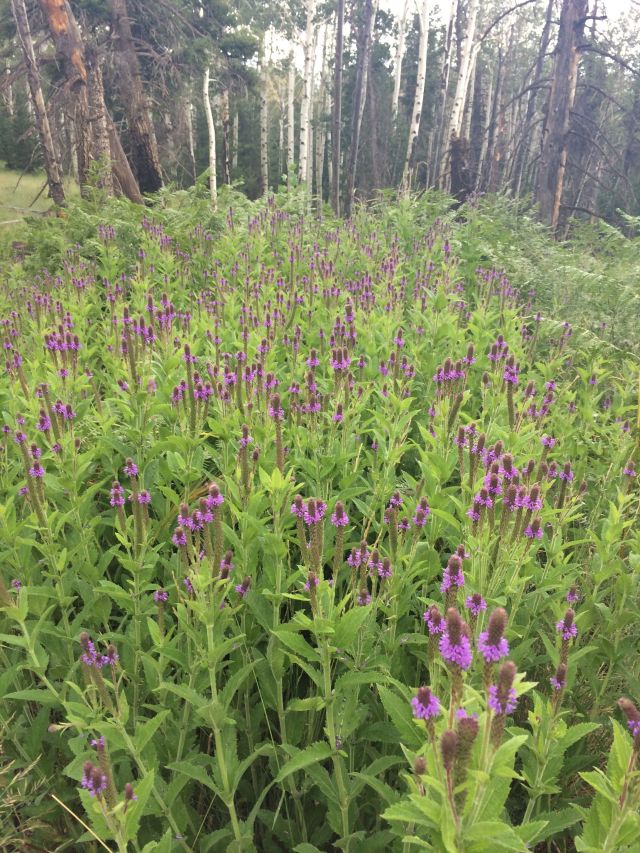 Fields of wildflowers join the ferns in the meadows. These are Verbena macdougalii.

The ferns are huge and grow tall in the sunlight. Can you spot the trail? It’s there…

Luckily, we hike with our dog, so staying on the trail was easier.

Can you see me now? Here’s the trail!

There are some long uphill slopes and some very rocky passages. 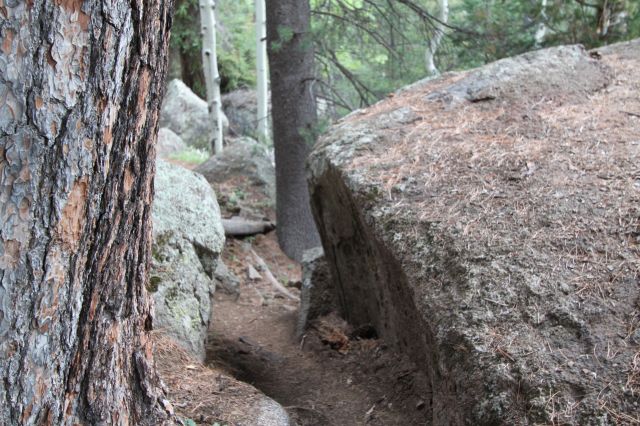 Some of the trail leads over and through huge boulders.

Eventually the Kachina Trail begins to lead downward towards Schultz Pass and the Weatherford Trail. The trail dips into several ravines carved long ago in the volcanic slopes.

The Weatherford trailhead is located at Schultz Tank at 8800 feet elevation. As you descend toward it, the vegetation changes and you find dense stands of spruce, fir and Ponderosa Pines.

Some of the tallest and healthiest Ponderosas along the trail are a good reminder of why these pine trees own that name. The tallest known pine on record is a Ponderosa. Arizona hosts the world’s largest contiguous stand of these trees. Mature trees have orange-brown bark, and some say they smell like vanilla.

After the rain, the insects come out of hiding, and go back to work. This fly is on a Lupine flower.

The Kachina Trail intersects with the Weatherford Trail and the Freidlein Prairie Trail.

The Weatherford Trail is an old road that once was an enterprise to take Model T Fords to the mountain top. It has been closed to vehicular traffic. It must have been quite an adventurous ride in a car, back in the day. 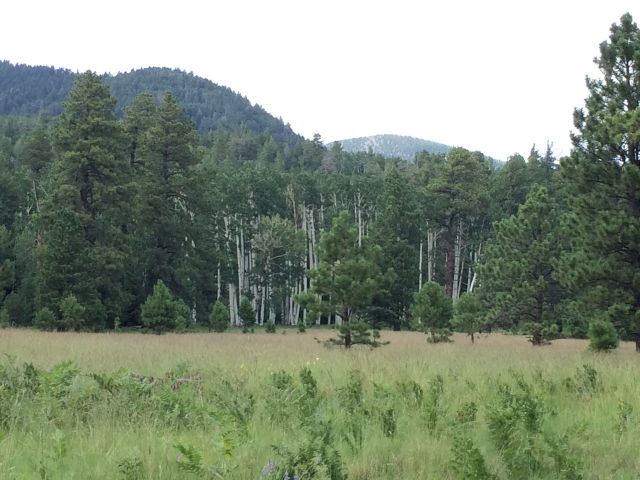 Looking back toward the Peaks from the Weatherford Trail, you get another nice view of a dense grove of Aspen. 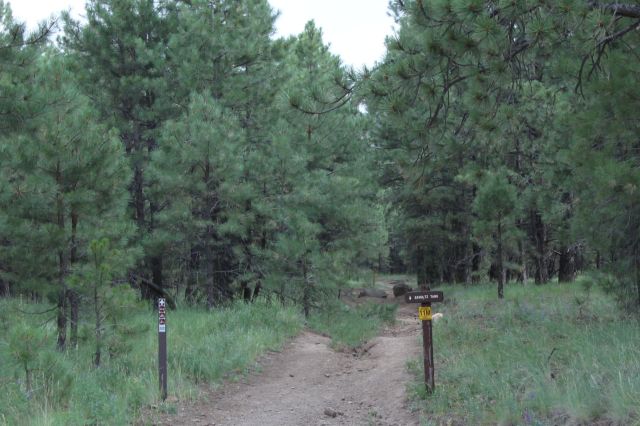 Since the Weatherford Trail itself leads uphill again, we take the lower section that leads down to Schultz Tank where it is possible to park a car. There are also bathrooms at Schultz Tank. We left a car at the Snowbowl, hiked one way, and used the second car at Schultz to retrieve the first one.

The end of the trail, or perhaps the beginning, if you choose to hike up to the Snowbowl trailhead, or take the Weatherford trail to up Doyle Saddle. 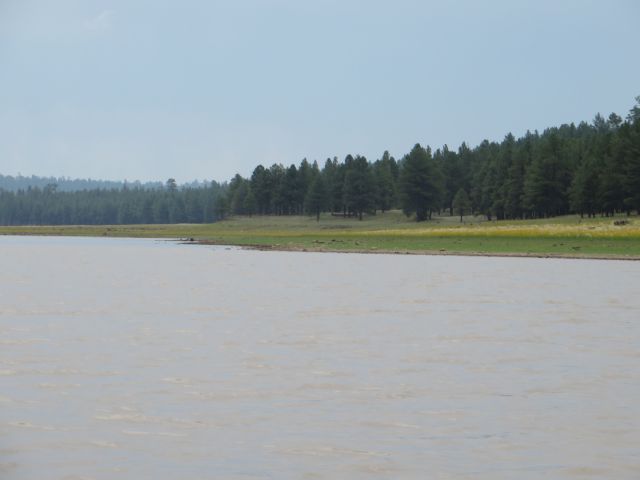 This weekend we took the kayaks to the Narrows of Upper Lake Mary.  The lake has maintained boat ramps for motorized and unmotorized boats.  The ramp at the narrows is very shallow and most suitable for launching light craft.  What started as a day with slight clouds and damp ground from a storm the previous evening, promised to give us enough time for a cruise around the area before the next storm could move in.  This is the monsoon season of Arizona, and prone to lightning, thunder and heavy downpours, so we started early.

You can see by the brown tint to the water, there has been substantial run off from storms.

Muddy water and a slight, chilly breeze greeted us.

The wildflowers are now in full bloom along the shore. In addition to the clouds, you could see a haze of smoke from wildfires in the air. 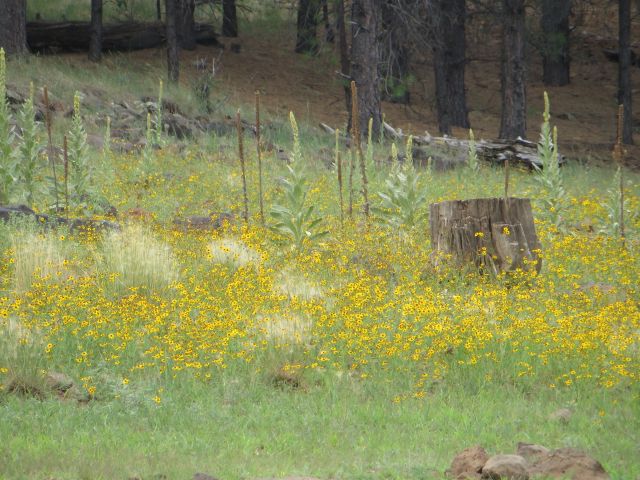 Crows, Blue jays and hawks were active along the shore.

Blue jays looked in the shoreline rocks for delicacies like crawdad pieces.

To the north we could see the summer thunderheads building around the San Francisco Peaks.

As the storm began to close in, we headed back to the ramp.

Turning back I caught sight of a watcher high in an old Ponderosa Pine. 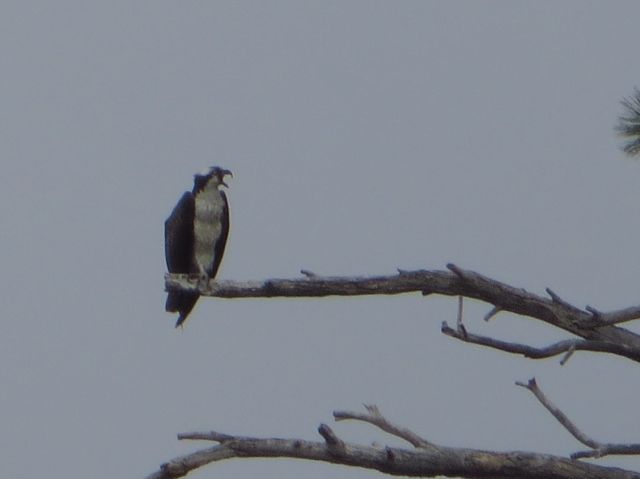 An Osprey watched from on high! 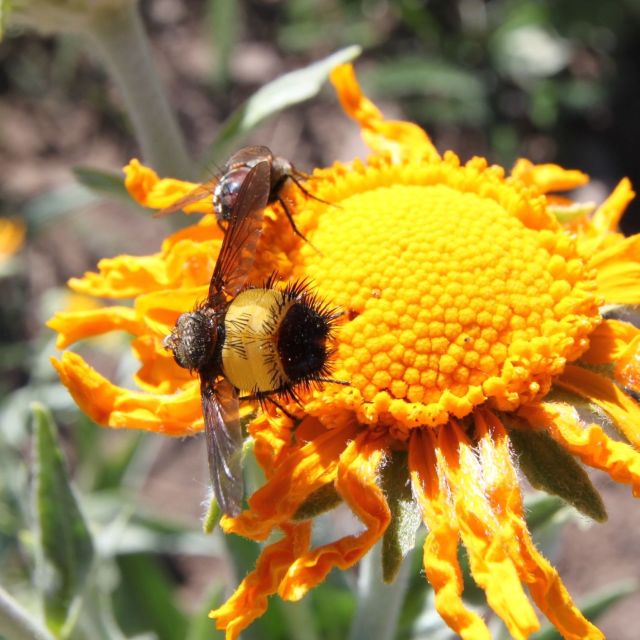 Many insects mimic others in their appearance. This bee-like fly is at high elevation near the Arizona Snow Bowl ski area.

You never know what you might find once you start taking macro photos.  Sometimes tiny insects pop out in flower photos that surprise you, or the detail on a beetle might be so much more elegant than imagined. Sometimes the play of light inside a delicate flower is amazing, yet unappreciated in the normal view. Here is a selection of recent macro photos from around northern Arizona.

This water skater made an exclusive home in the little red wagon until a hail storm ended his reign.

The flowers of the Lupine come in small clusters. 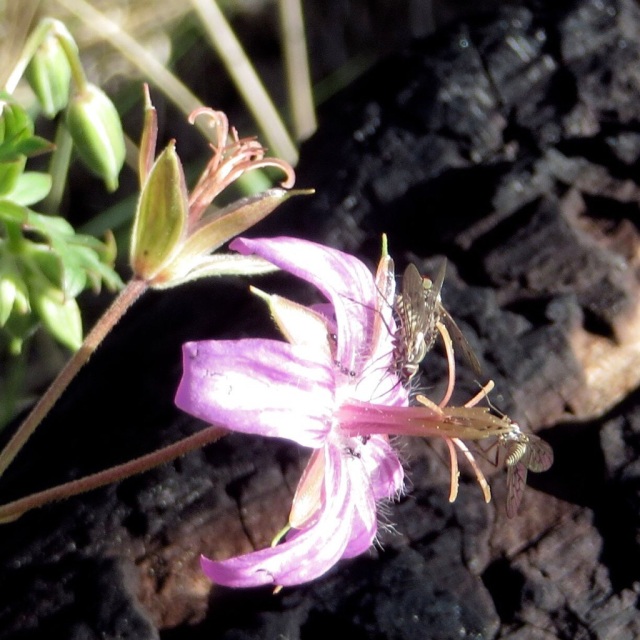 The Crab Spider is well camouflaged in the white daisy and quickly devoured the smallest insect.

This tiny Thistle bud will grow and eventually bloom with a beautiful purple blossom.

The Loco Weed is easily mistaken for Lupine. 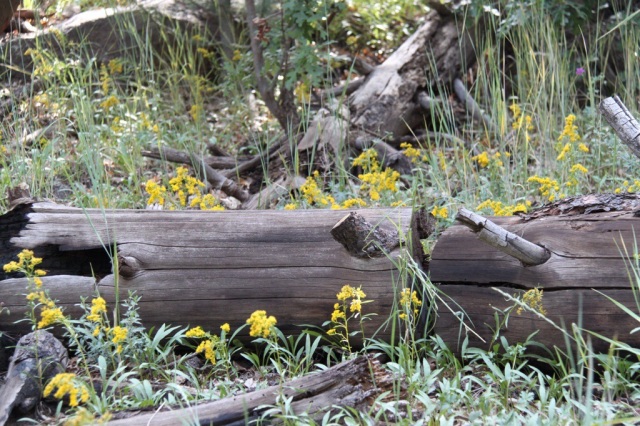 Just looking at the picture makes you feel an allergic response coming on? Never fear, it’s not the Goldenrod that people are actually allergic to! At the same time that Goldenrod blooms so conspicuously, the Ragweed often found in the same area is the usual culprit.  Ragweed has tiny green flowers that go almost unnoticed, but create huge clouds of very irritating pollen.  So enjoy this golden beauty.