Arizona’s iconic Saguaros respond to the seasons as do other Sonoran Desert plants, but they have a unique system for coping with desert heat and uneven moisture.  During the rainy season their accordion-pleated sides expand to hold as much water as possible for the dry times ahead.

The expansion areas run between columns of spines 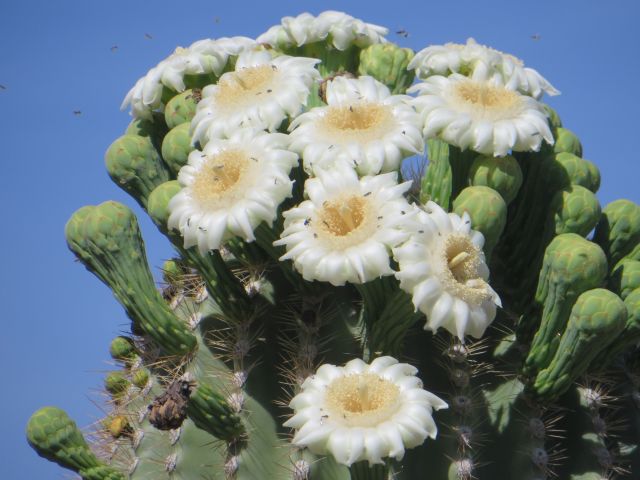 The Saguaro flowers open at night and are pollinated by bats, then birds and insects the next day. 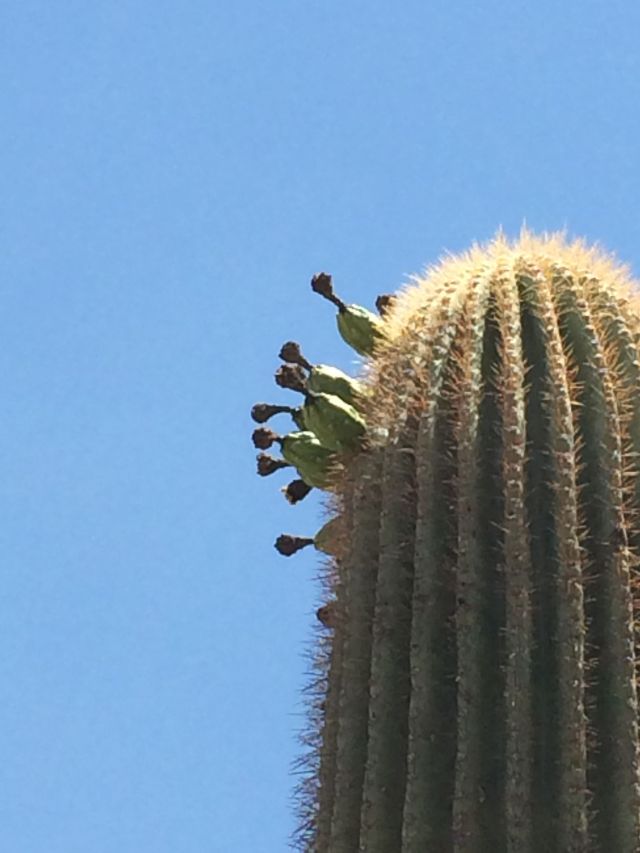 Three-inch-long fruits quickly form where the flowers were.

Sometimes hungry birds accidentally knock the fruit from the cactus.

The fleshy interior of the fruit is a rich red when ripe. 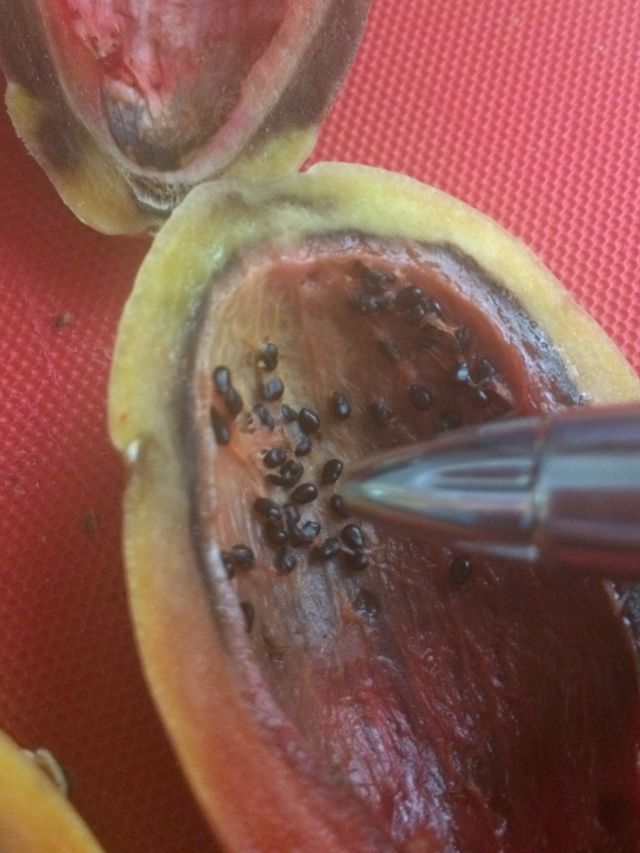 The largest cacti in the world come from these tiny unassuming seeds. 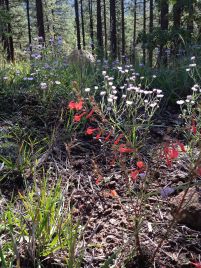 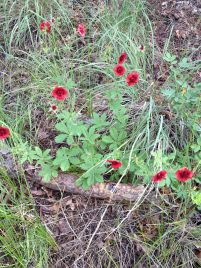 Cinquefoil along a stream 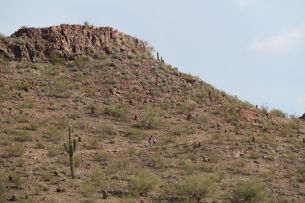 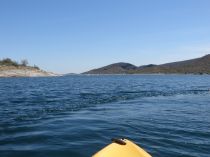 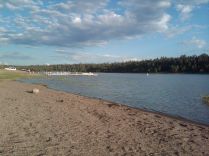 The Saguaro Cactus (Carnegiea gigantea) is an Arizona icon.  They are the largest cacti in the United States and are native only to the Sonoran Desert in southern Arizona and Sonoran Mexico. Although they can grow very tall, they have mostly very shallow roots.  When the desert receives a good rainfall, the Saguaro absorbs as much water as possible, and the pleated sides expand to hold the moisture. The cactus is supported by woody ribs, corresponding to the pleats visible outside. The pleats are covered with long spines to protect the waxy soft skin from predators like ground squirrels and rabbits.  Desert birds often make their nests inside the Saguaro, depending on the cactus’ natural ability to heal such a wound, leaving a cavity inside the cactus to be reused year after year.

How old is that Saguaro? Here is the official story from the Desert Botanical Garden in Phoenix: “on average and under the natural conditions existing just west of Tucson with 10 inches of rainfall annually, a saguaro often weighs less than an aspirin at age five and it may take about 10 years to get just an inch and a half tall, about the size of your thumb! Under these natural conditions it may take 20 years to almost attain one foot in height and 30 years to reach two feet tall, but by age 40 it may be up to four feet tall, by age 50 up to seven feet tall, by 75 up to 16 feet, and by age 100 almost 25 feet tall. Throughout its range and depending upon soil and rainfall, it first blooms between 40 and 75 (average 55) years old, usually starts to grow arms when it is between 50 to 100 years of age (average 70), and it may live for perhaps 200 years or more (again, no one knows for sure)”

According to that, this little one is probably 20 years old. 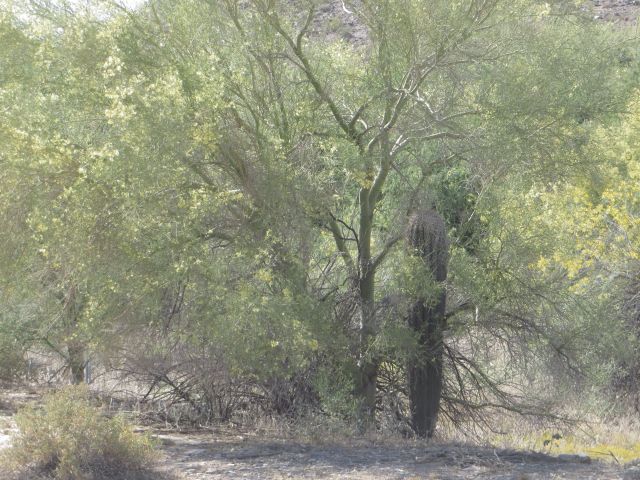 Saguaros often sprout under the protection of desert trees like this Palo Verde.

Lots of spines protect the Saguaro from hungry animals 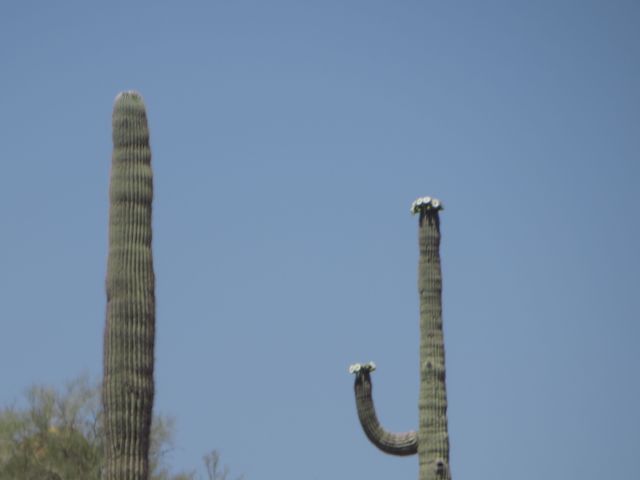 The flowers on a Saguaro form at the top and the ends of the arms.

The state flower of Arizona is the Saguaro flower.

This Saguaro at Lake Pleasant has unusual arms 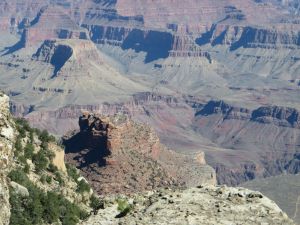 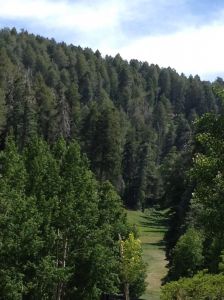 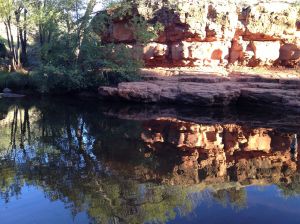 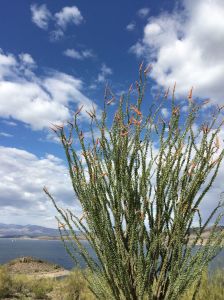